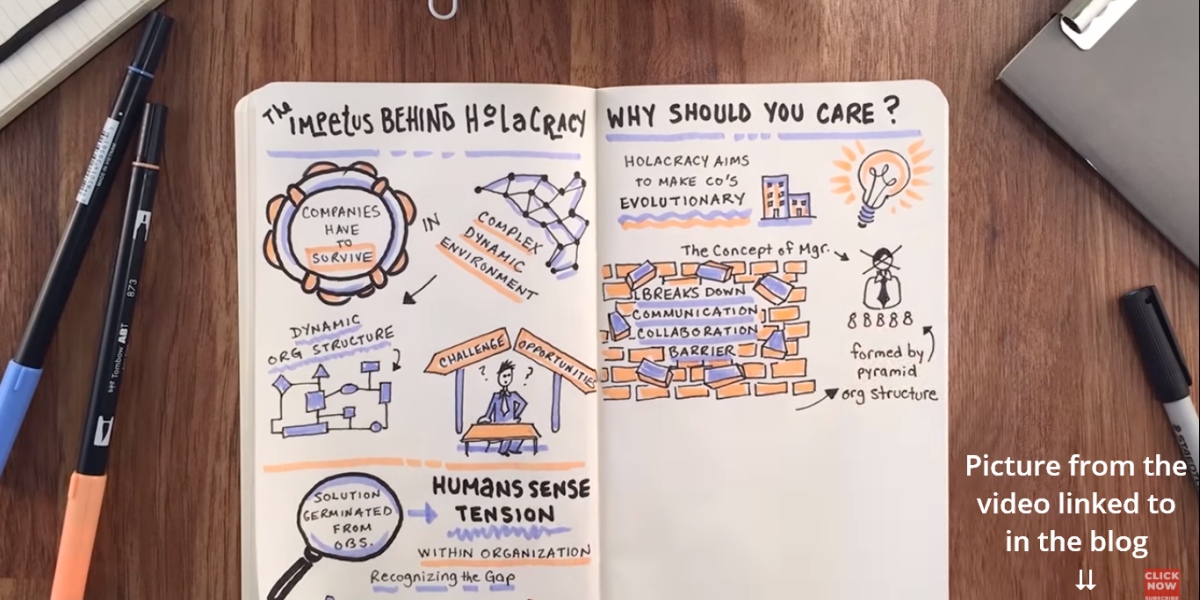 Holacracy is a new social technology for governing and operating an organisation, defined by a set of core rules distinctly different from those of a conventional governed organisation.

Holacracy is a practice, it is not your traditional management structure. Its key difference is that it shifts the power dynamic within an organisation, it takes the power as in a traditional management hierarchy, from one person or a group at the top, and spreads it throughout the organisation. This shift means that each individual in the organisation has the autonomy to make decisions and act upon them without having to ask for permission. Holacracy tells managers “it is no longer your job to solve everyone’s problems and take on responsibility for everything” and it tells employees “you have a responsibility, and the authority, to deal with your own tensions”.

A tension is something that is getting in the way of an individual fulfilling their role in an organisation. It is felt by an individual or a group. As human beings we are able to sense tensions and naturally we have an idea of how to resolve the tension. Old management structures only allow possibility for change to occur once it is passed through the correct ranking orders. Leaving the individual experiencing the tension helpless and utterly dependant on receiving the go ahead by an individual who is more than often sitting far away from the actual tension. Holacracy allows the individual feeling a tension power to change this through a structured governance process.

This paradigm shift is tremendous for how we work in organisations, under current management structures. In an organisation which has embraced Holacracy individuals in their roles are freed and trusted to sense and respond using their own judgement. They no longer have to seek permission, as this process slows organisations down from fulfilling their roles and serving the company’s purpose.

Holacracy gives autonomy to everyone. This is the beauty of it, this autonomy functions within an agreed set of parameters. These are agreed upon in a governance meeting and a set constitution provides guidelines for the practice of  holacracy.

Another crucial dynamic within an organisation changes, as part of this paradigm shift. In traditional organisations the boss often assumes the role of a parent taking care of the needs of his/her employees, this is a parent child dynamic. This dynamic causes employees to feel disempowered and victimised, and managers to feel overwhelmed that they have to take the responsibility to deal with everyone’s tensions.  Through Holacracy the parent child dimension changes into a functional relationship between autonomous self managing adults, each of whom has the power to lead his or her role in service of the organisation’s purpose. Wow, imagine that, going to work and knowing you will be respected as a self managing adult and the relationships formed will be functional as opposed to the dysfunctional relationships created in the old management system. If you are a manager, you are no longer expected to carry the burden of being the decision maker. Holacracy naturally expects individuals to step into their roles and fulfill their roles accountabilities. So no longer do you wait for someone to help fix things you are accountable to your role.

Why adopt Holacracy? Simply stated, we need it in our organisations. The old management hierarchical system was designed and developed when the telegraph was invented. We as humans have developed, changed, innovated, created a world which is so far from what the world was at the time of the telegraph. Our world is much more complex now, and we feel the constraints of this much needed shift. If we are to have functioning organisations that meet the needs of humans today in a respectful and equal manner then Holacracy is one way of introducing that in our organisations. Holacracy is designed to quickly and efficiently handle the complexities that organisations are facing today. The more and more complex world we live and work in, can not be maintained sufficiently under the old system of management which once served us well more than a hundred years ago.

Table showing the major shifts in an organisation which adopts the practice of Holacracy.

Business as Usual
Painful meetings with little or no structure Led by the boss; vaguely actionable outputs

Holacracy is one of the still rather few concepts or models for the new paradigm organisations; human-centered, purpose-driven, self managed and agile, to handle complexity. Others are e.g. Sociocracy 3.0 and Beta Codex. To find the right principles and transformational actions for your organisation, don’t hesitate to contact us! /Sarah & Shabana